After our crazy night at the Robot Restaurant (post soon!) with my friend Hiro-chama I had my bets on him booking us a table at the Kawaii Monster Cafe in Harajuku when we met again the following year.

Lo and behold, he came up trumps! 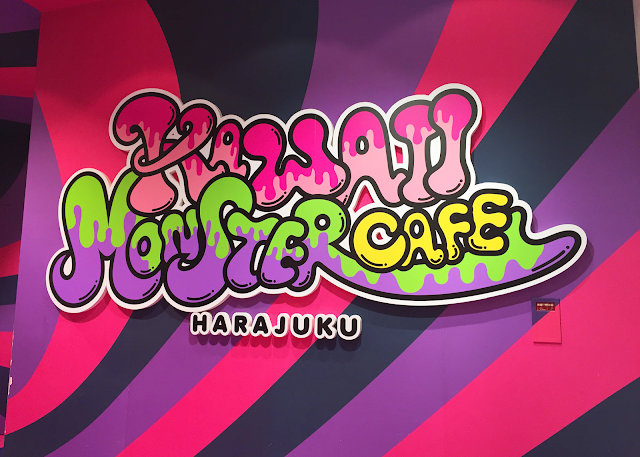 The brainchild of Harajuku legend Sebastian Masuda - best known for being the founder of the iconic Harajuku brand 6% DokiDoki and the art director behind my queen Kyary Pamyu Pamyu.


It's without a doubt, the craziest restaurant I've ever visited.

Not to everyone's taste of course, but if you're like me and can appreciate the creepy, cute plastic-y world of kawaii then you're in for a treat.

Hiro also brought his friends Marcel and Eddie along, who were adorable.
(Marcel has kindly allowed me to use his photos since I got distracted and pretty much forgot!)

Upon entrance, there is a huge wiggly red carpet which the host explained (and Hiro translated) is the tongue of the monster and we are entering the belly.

I don't currently have a pet - but if I did, it would definitely be a kawaii monster. 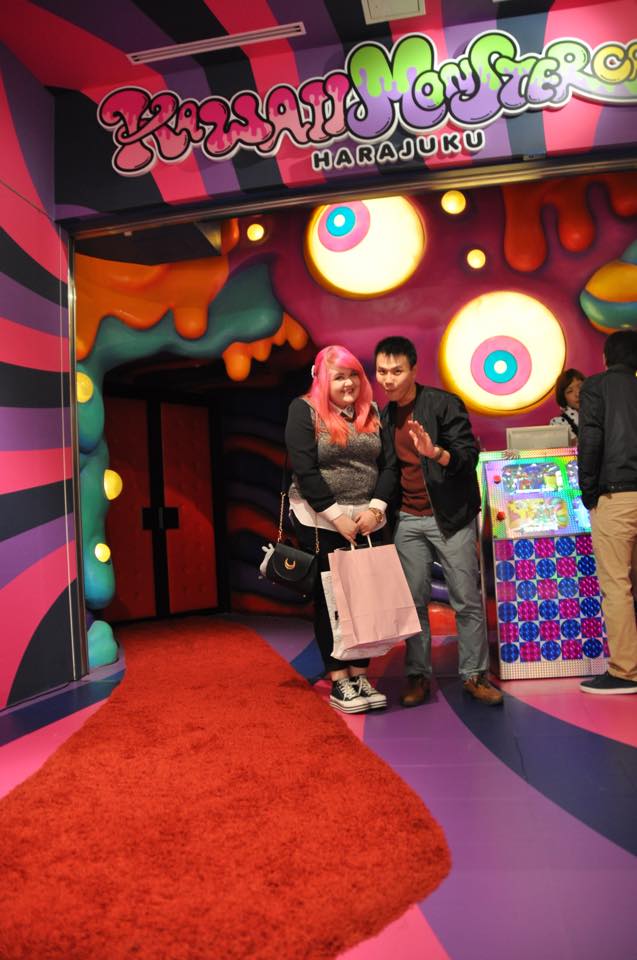 Me and Eddie looking surprisingly chill for two people about to get swallowed whole.
Note the fuzzy red monster's tongue carpet!


I had stalked seen several of the hosts online, and they are dressed in stereotypical Decora-influenced Harajuku get-up.
But we hit the jackpot and got a 'Harajuku boy' (aka 'Monster Dolly') who was utterly adorable. 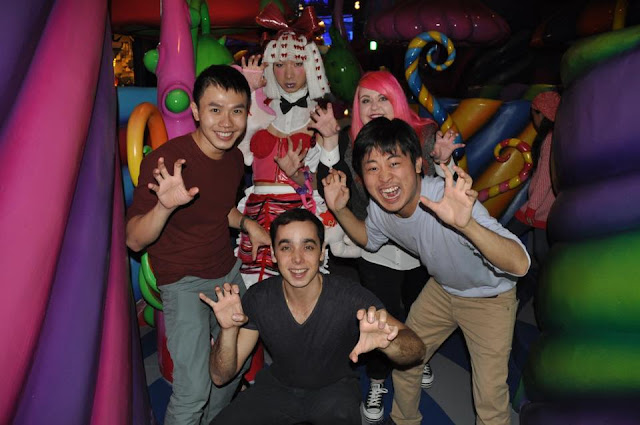 "You can take pictures, but please no touch!"


There are several areas in the restaurant to sit, all with a different theme.

We selected an area covered with plastic almost-kinda-sexual red lips and milk bottles hanging from the ceiling because why not? 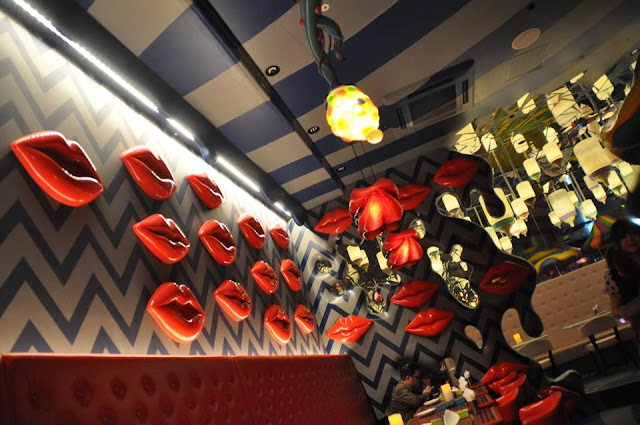 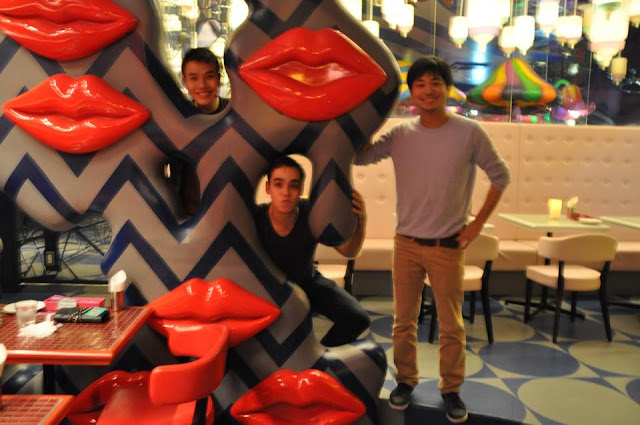 The menu itself was crazy, an ipad set in a big plastic cake. There is an option for Japanese and English.

It's incredibly easy enough to understand, but the very cute waiter still took us through everything. 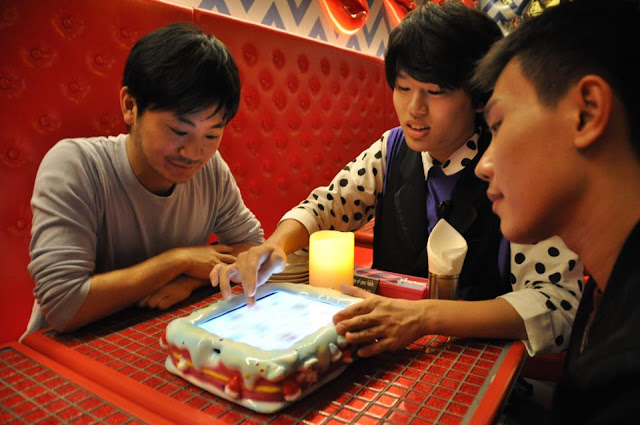 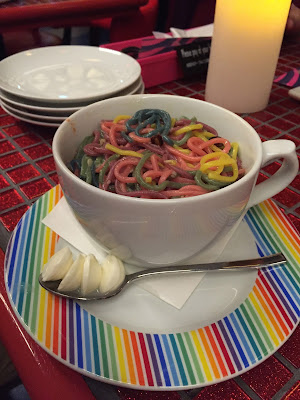 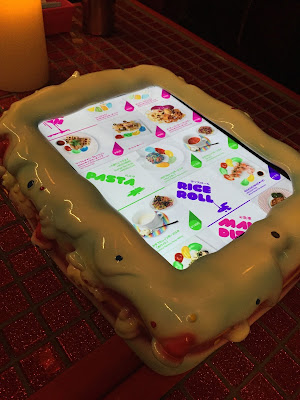 And of course the food is absolutely mental.
Everything is brightly coloured and looks like something Rainbow Brite would have for lunch.

Hiro went for the rainbow pasta in a creamy sauce, but he advised it was less of a pasta and more like ramen with cream cheese.

Me and Eddie went for the egg sushi which was pretty standard, not the best or worse I've had in Japan - however the brightly coloured smears of wasabi mayonnaise were actually pretty delicious. 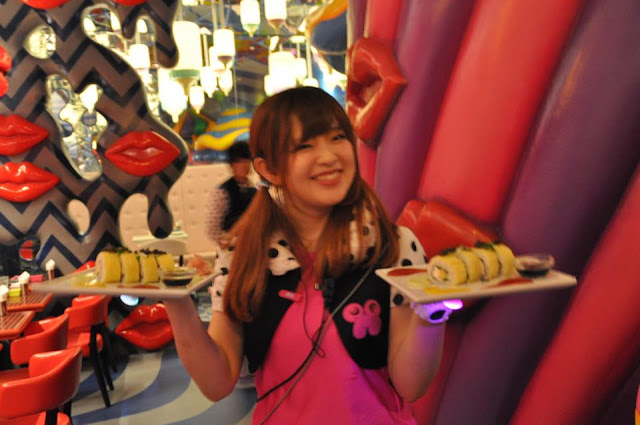 What really stands out are the desserts which don't even look real.
We chose a huge ice cream parfait to share - and even for four greedy people, it was more than enough!

Packed with ice cream and cake which was delicious but the real surprise was the rainbow frosting - each colour had a different flavour, and reminded us of the lickable wallpaper from Willy Wonka and the Chocolate Factory. 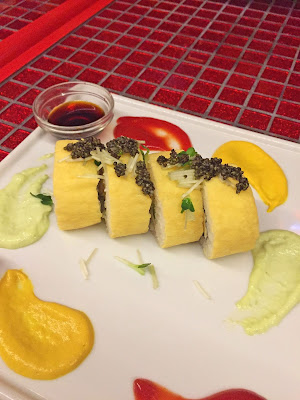 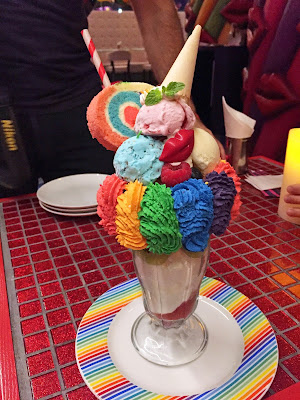 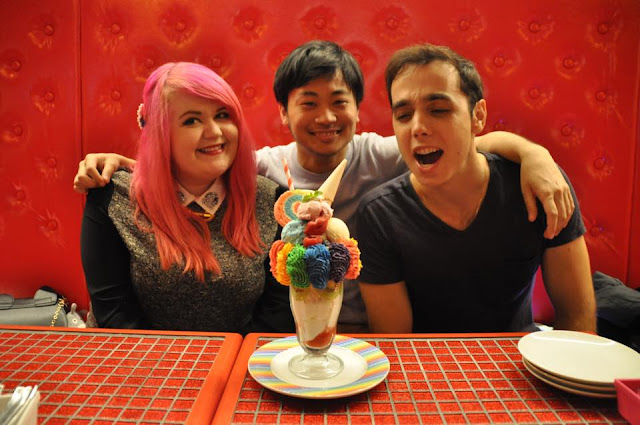 You are supposed to stay in your allocated area and there are rumours online of being thwacked with another charge if you go on a wander, but it was fairly empty when we went and nobody batted an eyelid. 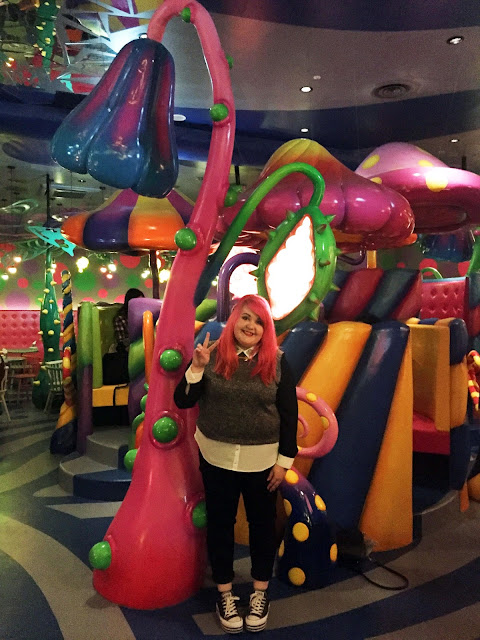 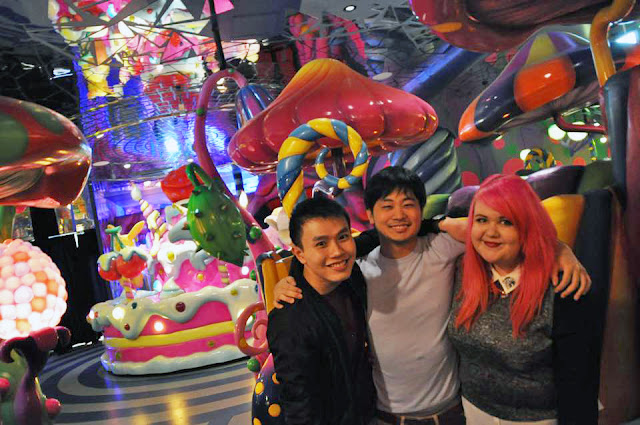 There is also a huge merry-go-round shaped like a cake with lashings of whipped cream, fruit and creatures - it would have been nice to be able to sit and pose for a photo, but unfortunately it's a no-go.

Apparently the Kawaii Monster girls (and boy, I guess) put on a show on the merry-go-round, but most likely due to the restaurant being almost empty when we went this sadly didn't happen. 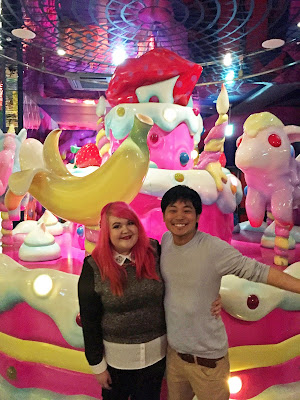 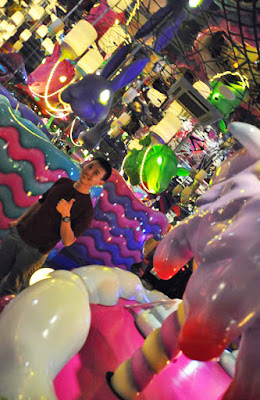 Our waitress asked where we were all from and was delighted we were all from different countries (I'm from the UK, Hiro from Japan, Marcel from Brazil and Eddie from Vietnam) and she presented us with colourful chopsticks to take home for free, decorated with our country's flags which was a lovely touch!

There is also a merchandise section, but nothing particularly caught my eye.
The usual though: pens, mugs, badges etc. 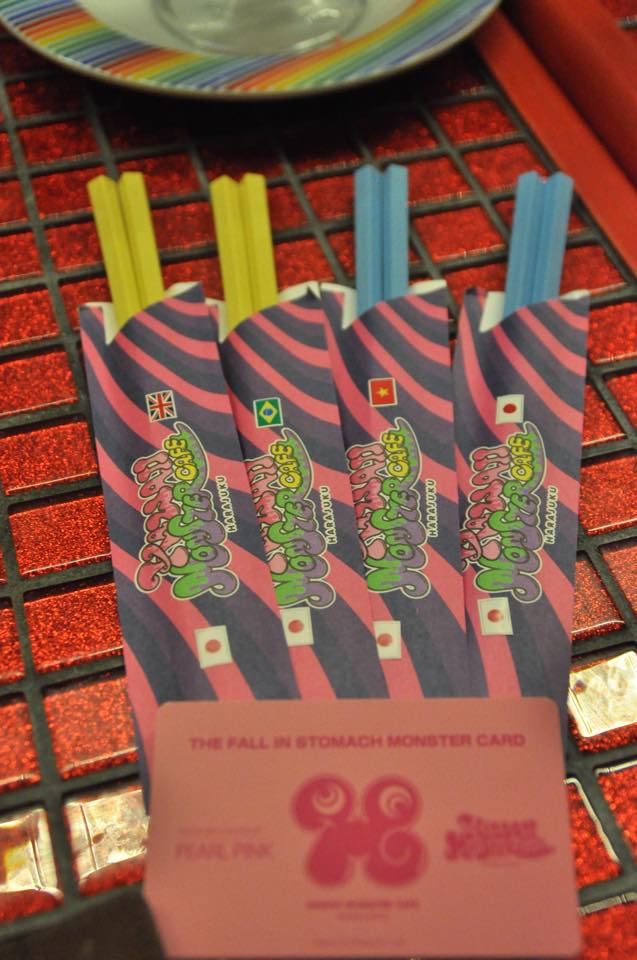 I think the price was quite reasonable for the experience - there is a Y500 (£3.50) cover charge per person, but you then receive a 'Fall In Stomach Monster Card' which means if you return your group gets in for free.

It certainly doesn't break the bank - especially for Tokyo!

Note that some evenings, the place has more of an adult vibe - including hosting fetish nights.
So if that's not your bag baby, best to check the website before planning your visit!

Overall the food is fair for what it is - the mains are not incredibly tasty, but the desserts are to die for.
The overall experience? Unmissable!


DISCLAIMER: Most photos (aka the good ones!) by Marcel Ferragi.
Email ThisBlogThis!Share to TwitterShare to FacebookShare to Pinterest